Back to home page click here
OTHER PROBLEMS ON THE NET 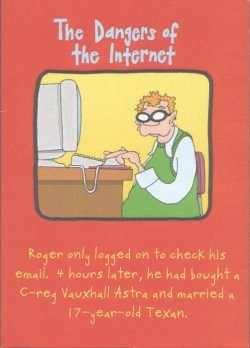 It will be self-evident from the contents of this Web site that I am an enormous enthusiast for the Internet. However, I am very aware of the host of problems raised by this powerful new medium or delivery platform. Many of these problems are examined in the pages of this site dealing with:

However, there are some other problems which do not fall into these three categories. These include gambling, obsession, plagiarism, relationships and spam.

Most gambling is of course legal and most of it is off-line in casinos, clubs, betting shops, lotteries and the like. However, online gambling is growing enormously and presents some particular social problems. Perhaps the main problem is that online gambling is available every minute of every day which makes it very attractive to the compulsive gambler. In a case which came to a London court in April 2006, 26 year old Sharna Baker was accused of stealing almost Ł500,000 from the City bank where she worked because of her addiction to online gambling. She was spared a prison sentence because the judge said that her addiction was an illness.

Mark Griffiths is Professor of Gambling Studies at Nottingham Trent University in the UK. He has identified the following problems:

Elements of the mass media are inclined to blame the Internet for all of society's ills when, in fact, most of the problems identified existed long before the arrival of the Net. Nevertheless, it would appear that some features of the Internet experience - such as, the 24/7 availability and the isolated nature of its use - can reinforce compulsive behaviour in some individuals, sometimes at a personal or social cost.

In January 2003, a 25-year old man from Minnesota, USA was imprisoned for a year, because his 13-month old son drowned in the bath as the man was surfing the Net.

There is now so much material on the Internet and it is so easy to find that some people - especially students - find it tempting to cut and paste text from other peoples' work into their own essay or project. This is plagiarism writ large.

It is a growing concern to teachers and lecturers and therefore some academic institutions are now using special software to detect such plagiarism. One example of such software is designed by California company iParadigms. The system colour-codes each essay according to how much of it can be matched to information on the Internet.

In many respects, the Internet is ideal for people who wish to establish relationships with others with a view to friendship, sex or even marriage. Initial contact is easy and cheap and the potential range of contacts is far wider than in the physical world. However, it is extremely easy for people to misreprersnt themselves on the Net and impressional individuals can easily be misled.

In the UK alone, every month about 3.5 million people access on-line personal services. The vast majority encounter no real problems and some even find sex or love or both. A few, though, become deluded or obsessive about their cyber friends at the risk of their existing relationship or personal finances.

Spam is unsolicited e-mail (the colloquial term spam comes from a well-known Monty Python sketch). Most spam is not of itself illegal - although some of it might become illegal in some jurisdictions quite soon. The problem with spam is that, because it so cheap for the spammer, there is so much of it - slowing down the Internet - and much of it is unwanted, time-wasting and even offensive (especially where the promotion of pornography is concerned). It is estimated that spam now accounts for some two-thirds of all e-mail in the UK.

Where does it come from? Well, 150 spammers are said to account for 90% of the world's spam and at least 40 of these based in Boca Raton in Florida. Many Internet users wonder how their address has been acquired by those issuing such e-mail. In fact, there are all sorts of technical means and software to search out or create e-mail addresses, even before we ourselves reveal that address by issuing e-mail or accessing web sites. This is particularly a problem for someone using a well-known e-mail facility like Hotmail or someone who has used the same e-mail address for some time. Therefore one option for minimising this type of mail - although it is certainly not a convenient one - is to change one's e-mail address.

In both Europe and the USA, there is such growing concern about the volume and nature of spam that there are now serious efforts to make it illegal to send such communications without either the option to opt out or a requirement to opt in to receiving such material (similar to arrangements that we have for the off-line equivalent which is direct mail, often known as junk mail). CAUCE, the Coalition Against Unsolicited Commercial Email, is a leading campaigner for effective world-wide counter measures.

In the United States, the Can-Spam Act (Controlling the Assault of Non-Solicited Pornography and Marketing) was passed in late 2003 and came into force in January 2004. It allows spammers to be imprisoned and it outlaws many of the tactics spammers use to hide their tracks and avoid censure. However, only Internet service firms and governments can use the Can-Spam Act to tackle spammers.

In May 2002, the European Parliament voted to protect European Internet users from the practice of unsolicited e-mail advertisements by adopting a directive, making it illegal to send unsolicited e-mail, text message or other similar advertisements to individuals with whom companies do not have a pre-existing business relationship. The Directive came into force on 31 October 2003.

Meanwhile, in the UK, the Advertising Standards Authority has decided that in Britain bulk e-mail should either require the permission of the recipient or be clearly marked as 'unsolicited', although it is unclear how these requirements will be enforced. Also, of course, most spam comes from the USA where there are no anti-spam laws (although the state of California is currently considering one and the issue is under consideration by Congress).

Since all legal and industry measures will take time and will only be partially effective, there are some technical measures which one can take to minimise (but not stop totally) this problem. One can express concern to one's Internet service provider (ISP) and ask what arrangements the ISP has in place to block or minimise spam. Furthermore one can purchase anti-spam software such as Mailwasher or SpamKiller or, at no cost, make appropriate settings to Microsoft Outlook or e-mail providers such as Hotmail and Yahoo!.