Back to home page click here
"A FRIEND INDEED" 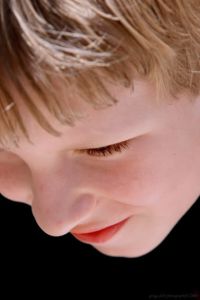 The knock at the front door announced a visitor. The erraticness of the knock and the absence of a shape through the glass panes which made up the top third of the door suggested that it was a little visitor.

Phil Radcliffe and his wife Molly had lived in this crescent for almost three decades. When they had first moved here, their son and daughter were children and there were many other kids around, all of them happy to play in a street which had no through traffic and all of them knowing that they could call on any house for a friend or advice.

All these children were now grown up. Phil's son had graduated and was starting his career, while his daughter was now away at university. A new generation of families - much more ethnically diverse and with even more children - had moved into the crescent, but the geography of the place meant that the new kids also had fun in the street (although the bicycles were now more expensive) and the families still all knew one another so that the youngsters bounced from home to home looking for friends and entertainment.

Even Phil and Molly were regularly visited and, since all the parents knew and trusted each other, sometimes the youngsters would come in for a time. In the school holidays, Molly and Phil had even been known to take a couple of the children at a time to the local cinema to give some of the parents a break.

The knocking was repeated. It was half term and it was probably one of the kids. Phil didn't mind - it was just that he wasn't quite ready to receive visitors. Molly was already at work but, as a consultant often working from home, he could take things more easily and he was still having breakfast and hadn't even put on his glasses (he was seriously myopic without them).

Phil opened the door, looked down, and found a small boy of about 10, head down and face hidden, nose sniffling, obviously in some distress.
"Come in", he gestured. "Take a seat in the living room. I'll be with you in a minute. I just need to get my glasses."
He sped up the stairs, ran into the bedroom, and picked up his glasses from the bedside cabinet. That was better. Now the world was in focus and he could engage with people.

"Now then" Phil announced as he strode into the living room. "What's all this about?"
The young boy looked up, still tearful, and silently held his gaze. Phil was shaken to near paralysis. The boy had a strikingly familiar look and indeed appeared exactly like he himself had done about the point when he was moving from primary to secondary school. There was the pronounced anxiety in the grey-green eyes set in a pale and troubled face. He studied the boy more closely. There was the tuft of hair that would never lie completely flat and the small scar over the left eye as a result of a football accident when he was seven. How could this possibly be? Was he dreaming or ill? He felt disorientated and confused but also curious and, after a few moments, decided to simply surrender to the situation.

He had only been known as Phil once he went to university, so he tried addressing the boy as he himself would have been known at that age. "Philip", he asked hesitantly, "are you alright?"
The boy seemed perfectly relaxed about the appellation, but genuinely distraught by the inquiry. "Sorry, Mr Radcliffe" he sobbed. "My dad's just left home. He's not going to live with us any more. Mum's crying. It's made me cry. I don't think I'm going to see him again."

For Phil, this news exposed a palimpsest of raw memories, many of which he had chosen not to revisit for many years, others of which he had simply managed to forget. When his father had walked out, the emotional edifice of his young life had come crashing down and some of the pieces were still broken or even lost. But his father had kept in touch. He'd seen seen him regularly, if not always happily - often spending a couple of hours together seeing a film. Once the lights of the cinema went down, he forgot his troubles and lost himself totally in the events on that flickering screen.

Over the years, a series of figures had provided him with the sort of paternal support that he would have loved to have had from a father in residence: his favourite teacher who was always willing to talk to him in the schoolyard, the local trade union official at his first manufacturing job, his tutor when he eventually made it to university, a line manager who built up his confidence and gave him his first promotion.

Over time, something inevitable but, to him, strange had happened. As he became older, he himself increasingly became the paternal figure, not just to his own son and daughter, but later playing with nephews and nieces, mentoring young colleagues at work, and providing encouragement to the youngsters of friends and even some of the kids in the crescent.

Phil understood exactly how the boy in his living room was feeling. He sat down next to him and put a comforting arm around his heaving shoulders.
He tried to reassure the youngster: "I'm sure that you'll see your father again very soon, Philip. You're a lovely boy and he'll want to see you a lot. Your uncle is as mad about your football team as you and he'll take you to matches. And your teachers will understand if sometimes you're a bit sad."
The boy blew his nose with a handkerchief and wiped away his tears with the back of a hand.

"Let me get something for us" Phil suggested. He went into the kitchen, pottered around, and then returned with an orange juice for the boy, a coffee for himself, and a selection of biscuits for them both. However upset he might have been, young Philip was obviously happy with the drink and concentrated on the chocolate samples among the biscuits. Phil found his gaze drifting down to the boy's scruffy shoes and he noticed that the laces were badly tied. Somehow, even as an adult, he'd never managed to learn to tie laces properly.

Once the boy seemed more settled, Phil asked him: "And how are things at school, Philip?"
"Bad, Mr Radcliffe" came the honest answer. "I'm not as clever as the others. I just don't learn as fast. Mum tries to help me a bit, but I get angry because I don't understand, and then I throw the books across the room."

Familiar and uncomfortable memories floated across Phil's mind. Most of the time school had been a nightmare. He just didn't get it and what the teachers had thought was encouragement had for him too often been pressure. He'd left school at 16 with a mere handful of exam passes.

It was his trade union who had provided the turning point. The courses he did at their college taught him things that were relevant to his work and encouraged him to read more widely. The company had given him day release to sit some more exams and passing them gave him a new sense of belief in his intellectual abilities.

When his father died and left him some money, he used the financial windfall to become a mature student at his local university and surprised himself at how much he loved studying and obtaining a degree. A decade later - with Molly's encouragement - he'd returned to academia and done an MBA. He was a believer in lifelong learning and still went on short courses from time to time.

Phil attempted to bolster the boy's sense of worth: "Don't worry too much about school. Just do the best you can. Some people take longer than others to learn things. You might find that you like learning more when you're a bit older. Just don't give up. We can learn at any age and we should learn at every age."

The lad did not seem entirely convinced but he was definitely calmer now.
"Can I use your bathroom please?" he asked.
"Of course, it's at the top of the stairs on the right."
Phil took the cup and glass back into the kitchen, but left the remaining biscuits. When the two of them were back in the living room sitting on the couch, he proposed: "Perhaps you should call your mum and tell her where you are, so that she doesn't worry."
"It's OK, Mr Radcliffe" he insisted. "I'll go home in a few minutes. But I like talking to you."
"You can stay as long as you want Philip. I just don't want your mother to think that she's lost you."
The response surprised and troubled him: "One day, I'll lose her, won't I? She'll die and I'll be without her."

Phil's heart went out to the boy; the poor lad had just lost his father in a sense and, even at this tender age, was contemplating another, profounder loss. What could one say to that? He could not deny that one day it would happen. Indeed for him it had happened and it was terrible and ugly.

His mother - who was Portuguese - had been living alone when she had a serious stroke and she had wandered the house without food or drink, using wherever she was standing as a toilet, for the whole weekend before the postman spotted her through a window and alerted the neighbours. She had made a reasonable recovery physically but she never spoke English again. He had never learned more than a few words of Portuguese and so, for the last seven years of her life, effectively they had been unable to have even a simple conversation.

It still pained him to think of his mother. He still carried her picture in his wallet. Inevitably, though, over time the ache had eased and now he pictured her more often in her prime - warm, loving, laughing. He would find himself grinning as he recalled her odd aphorisms whose idiosyncrasy he thought often owed something to a loss in translation from Portuguese.

"Philip, please don't worry about your mother. She's still young and she'll be with you a long time. Of course, one day, she will die - but we all die. When that happens, you'll be a different person, an older person. It will be hard but you'll cope - believe me."

On the door step, young Philip looked up at his friendly neighbour. "Thank you very much, Mr Radcliffe. I feel a bit better now. Can I call again sometimes?"
"Of course" Phil assured him. "Come and talk whenever you like. Molly and I love seeing you and your friends."
In one last indication of insecurity, the boy then said very quietly: "But you might be out. Or you might move away."
Phil cast a benevolent look at the boy, placed a comforting hand on his shoulder, and assured him: "Don't worry. Whenever you want me, I'll be there. Whatever happens, I promise you that I'll be your friend as long as you live."