Back to home page click here
"THE STORYTELLER OF DAMASCUS" 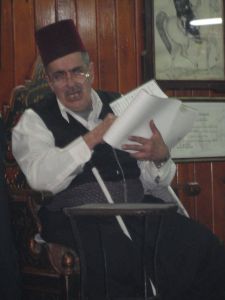 "Let's go and listen to the storyteller of Damascus."
"What do you mean a 'storyteller'?"
"It's a old tradition. I've read that it goes back to the 12th century. It started in the streets and then in the Ottoman times it moved into the coffee houses. There's just one left now. We can go and hear him tonight."
"Gosh, you've done your homework."
"Not really. It's in my guide book. It sounds great, doesn't it?"
"It certainly sounds different. I've never heard of it. Let's give it a go."