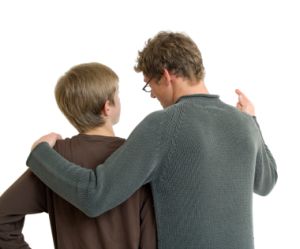 This was the moment that Andrew Norton had been silently dreading for six months, the time when his only child was leaving the family home to go to university. He could barely contemplate that it was 18 years since he'd been present at Alex's birth and first held that soft and vulnerable pink bundle.

It was still hard to believe that, only four years later, his mother would leave them both, but thankfully she had readily agreed to him having custody and had seen her son very regularly over all the intervening years. Vanessa had been a wonderful step-mother and Alex had soon wanted to call her 'Mum'.

In the spring, Alex had broken the news: "We need to talk, Dad. I've like made my decision about uni."
"And what have you decided?"
"I'm going to go to Edinburgh."

"Look, Dad. I love you tons and you've been a terrific father. But like it's time that I had my space and I won't get that if I'm studying near to home with you wanting me to come back all the time and you driving over whenever you can. You must see that. You have to let me go."

And now the time had come.

A horn hooted outside. He'd wanted to drive Alex to Heathrow but his son had insisted that he didn't want his parents at the airport and arranged for a friend to drive him there.

He gazed for the last time for some time on his son. It was like looking at a photograph of himself a couple of decades ago, except that Alex had not shaved even today, his hair was longer, he was a bit chunkier, and above all he was taller. He still found it strange looking up to his son.

"I can't pretend that I won't be sad, Alex. I've been down all summer, knowing that these were our last weeks together. And we've hardly seen you. You've been visiting friends all over the place."
"I know, Dad. I thought that it would help you adjust ..."
"Well, sorry to disappoint you. It didn't work. But I know - you have to go. Have a great time at Edinburgh - and try to keep in touch."

"The four years have flown by, haven't they?"
"To be honest, Alex, they've probably not sped past for me at quite the speed you've experienced."

During his degree course, Alex had only come home at the end of each term and sometimes he missed those breaks so that he could visit new friends around the country.
"Well, only one more term – and that's it."

Andy wondered what 'it' was exactly. He didn't think that Alex would do a postgraduate course – at least not yet. Four years of studying and examinations was enough. But, during his time in Edinburgh, he'd gone 'native' and become a Scottish nationalist. Andy wouldn't be at all surprised if Alex said that he was now going to work in Scotland. After all, he could use his Business Studies degree anywhere.

Andy was amused by the euphemism: "Alex, you've met somebody almost every term. We can't keep up with all the names. As fast as we've memorised one, you've moved on."
"Well, none of them was serious. This is - I think. Anyway, when I go back, we're moving in together to see how it goes so, that when we both graduate, we're gonna be in a better position to make a decision about our future."

"I see. And what can you tell us about this lucky woman?"
"Donna's American."
Andy tried hard not to show his sense of shock.
"She's from San Francisco."
Numbers blasted into Andy's mind. London to Edinburgh = 300+ miles. London to San Francisco = 300+ miles plus another 5,000.
His face visibly sank.

Alex didn't seem to notice, but Vanessa certainly did.
"She's doing archaeology. She says that there's more old things in Europe than America, so she wants to stay over here."
Things are looking up, thought Andy.
"And she adores visiting London, so we'll move down here and look for jobs."
Yes, things are looking very up.
"So how cool is that?"
It was very, very cool indeed.

When Alex had left for the airport, Andy turned to his wife with a very broad smile on his face.
"Andy back in London. With someone he cares for. I'm so happy."
Vanessa cast a benevolent eye over his grinning visage and simply commented: "It isn't over till it's over."

"Oh, lord, Alex. I never thought that I'd complain that you were round here too much, but I can't imagine that there's anything about the wedding that you and Donna haven't discussed with Mum a thousand times. What is it now?"
"Is Mum home? We need to talk."
"She's in the garden. I'll get her. Make yourself a coffee or something. Won't be a minute."

Andy and Nessa sat on the couch together and observed a clearly distraught Alex.
"Donna and me have broken up."
It was Nessa who recovered first: "Oh, Alex, no. I can't believe it. What happened?"
"It's complicated ..."
"You're telling me it's complicated, Alex. The wedding's in two weeks. Everything's arranged."
"There isn't going to be a wedding, Dad. I'm so sorry. I know that unscrambling things is going to cost a lot – but Donna's changed her mind."

"Changed her mind?" muttered Andy. "About what?"
"About a lot of things. About me. About London. She's going to back to America."
Nessa came in: "And what about you, Alex? How are you feeling about all this, love?"
"I'm feeling shattered ... bitter ... angry. But I'm changing my mind about some things too."

"What does that mean?" queried Andy.
"I'm sick of the City. I need a break from it all."
Alex had done brilliantly in the last three years and his move to Lehman Brothers a year ago had seemed to seal his success. Andy really didn't understand what his son did at the company – something to do with new securitisation instruments, whatever that meant.

"A break? What sort of break?"
"I'm leaving Lehman. I'm going to go travelling.”
"You're leaving Lehman? But they're doing so well ..."
"Yes, but I'm not ... I was already feeling stressed out. Now, with Donna leaving, I feel like total shit."
"Perhaps in a few weeks ..."
"Look, Dad. I didn't have a gap year before going to university, so I'm going to take some time off now. Clear my head. Get over Donna. Forget Lehman."
"Time off? But for how long?"
"I don't know, Dad. I don't know anything just now. As long as it takes to get myself sorted out and work through what I'm going to do with my life now. I'm going to start in Istanbul and work my way east: India, Vietnam, China ..."

That evening, Andy and Nessa talked over the situation. He was stunned and saddened by the dramatic turn of events.
"No marriage. No Donna. And no Alex. This is awful."
As usual, his wife was somewhat more stoical: "It isn't over till it's over - and then it isn't over."
Sometimes, just sometimes, Andy wished that he hadn't married a history teacher.

"Hi, Alex. Great to see you, son. Come in. Come in. But where's Lalita?"
"Sorry, Dad. She's not feeling too well. She needed to rest. She says 'sorry'."
"Is she OK? We haven't seen her for weeks and she doesn't seem to have been too good a few times."
"She's fine, She's fine. Where's Mum? And where's dinner? I'm starving."
"She's in the kitchen slaving over a hot stove to make you a good English roast as a change from all the good vegetarian food that lovely Indian wife of yours keeps giving you. She had a rice dish for Lalita - but it will keep in the deep freeze."

The roast was delicious, Alex agreed, and the red wine that accompanied it encouraged him to be more expansive than he had intended.
It was his father who started the line of conversation: "So how's that Interwebby thing of yours doing?"
"Actually, Dad, our Web 2.0 company is doing really well. The techie guys are brilliant and I think that I've added some much needed business acumen to the enterprise. I'm meeting a venture capitalist on Monday and I think that we'll get the investment that we need to get us through the first couple of years."

"Sounds good."
"Those guys have got some great ideas. Believe me: they're not just leading edge but bleeding edge. It's incredibly competitive though and the best ideas are still coming from Silicon Valley. I'm off to a trade fair in San Francisco next month to check out the competition."
He drank some more wine.

At the mention of the Californian city, Andy ventured a delicate question: "Do you ever hear anything of Donna?"
"No, nothing. She's probably excavating the San Andreas fault somewhere now. She always was good at causing earthquakes."
The wine was good.

"Actually, since you mention Donna ..."
"Yes, what about her?"
"Well, I didn't tell you at the time, because I know how much you love kids, but Donna didn't want children. I was really sad about that but I loved her so we agreed that we wouldn't have a family."

"And, Alex", responded Nessa, "why are you telling us this now?"
Just because he was travelling back on the underground didn't mean that he should have drunk so much wine, but he did feel rather mellow and not a little pleased with himself.
"I suppose because of Lalita. She isn't ill. She's pregnant. We didn't want to say anything for a while – but you know now."

"Congratulations, son!" Andy came round the table and gave his son the strongest hug that either could remember.
"I'm so, so pleased for you both." Nessa kissed him on both cheeks.

Alex was grinning inanely now. "She's going to have twins. We think it might be a boy and a girl." The three of them veritably shrieked with delight.

In bed that night, Andy was bubbling with excitement: "Alex's got a great job, he's got a great wife, and we - my dear - are going to be great grandparents!"
She smiled at him and said nothing.
Reluctantly he filled the gap. "I know ..." he said. "It isn't over ..."