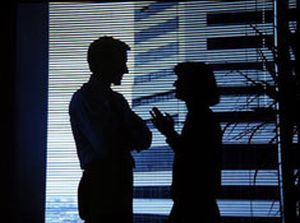 "Ladies and gentlemen, I promised you an inspirational address and I'm sure that you'll agree that David Sinclair has more than delivered. Please show your appreciation in the time-honoured fashion." The applause was lively, prolonged and genuine.

The local branch of the Chartered Institute of Personnel and Development had been running a series of talks under the banner 'Leadership In An Age Of Austerity' and he had been the final speaker ñ a minor celebrity to conclude the theme.

People crowded around, paid an appropriate compliment, asked a polite question, peeled off. Across the room, one woman was looking at him with special attentiveness. He caught her eye and she smiled with a broad mouth. Instinctively he smiled back. She was about his age ñ late fifties. Her hair was longer than most women of her age but she had made no effort to disguise the greyness. She was not slim ñ cherubic and curvaceous would be an appropriate description.

She took some steps towards him and then seemed to hesitate. He held her gaze and this seemed to encourage her to come forward.
"David" she offered in what appeared an over-familiar manner.
He was caught off-balance: "I'm sorry. Do we know one another?"
"We almost married once."

"Really?" He thought it was a joke and he was waiting for the punchline.
She offered an explanation: "Sheila Rowlands. You knew me as as Sheila Ann Marriott. Sam."
He dived into the murky depths of his memories, plunging down among the weeds and bracken, but it was too dark and he could see nothing.
She was aware of this and clarified further: "Our last term at university. We dated. We were lovers."

It was coming back now, shimmering into his consciousness, like a heavy branch freed from the depths and bobbing up to the surface, but still oddly-shaped and indistinct. Their time together had been short but intense. Fierce political discussions. Some great rock concerts. Terrific sex. But he didn't recall much clearly from that time. Too many all-night parties. Too much alcohol. Too much cannabis. He was lucky to come away with some sort of degree.

"So ñ forgive me ñ what happened between us? How did it end?"
"It didn't really. You said you wanted to travel abroad before you settled into a job, marriage, kids. You said you'd write."
"And did I?"
"Never." She made it sound like a sentence rather than a word.

"And what happened to you, Sam? Sorry, I guess I should call you Sheila now. How did things work out - with your life?"
"Good. I went into human resources, got married, had two boys - one just out of university, the other just starting. But I was widowed three years ago. Heart attack. So I'm alone now."
She fixed him with sharp grey-green eyes. "And you, David? How did things go?"
"Well I did go travelling. Got as far as Thailand. Was badly mugged, so came home much earlier than I expected. Professionally I've done OK - you know, the consultancy, the books. Personally, well ... two marriages, two divorces, no children."

She started to compliment him on his speech, picking up on one of his messages - but he wasn't really listening.

His mind was racing now, fumbling to reach back more than three decades. Sam?? Sam? Sam ... Yes. Long, curly hair with a centre parting and a gorgeously wide mouth. She had been ravishing then ñ not just good in bed but really sharp in debating his pseudo-revolutionary politics. Thinking about it now, she would have been a wonderful life partner ñ but he was just not ready then. A sense of prevailing sadness ebbed up and washed over him.

The memories were shapeless and opaque but one particular incident began to take form and float up to the surface.
"Didn't we go a Rolling Stones concert together?" he asked
"We certainly did. Well remembered."
"That was a fantastic night. I felt so close to you that time."
"Really? It was at that concert that I told you I loved you. But you pretended that you hadn't heard me. I knew then that you didn't want to commit."
"What you you mean? I never heard you say that. I hardly heard a thing you said at the whole event. The noise was crazy."

She was saying something about if she'd only known and how differently things might have worked out.

But his mind was floating back even further ñ to English lessons at school when he had been in his early teens. They'd had an enthusiastic teacher who'd seemed old at the time but, looking back now, he would only have been in his early fifties. Joseph Vernon Connolly ñ or JVC as the boys had called him. The name and the initials had struck them as faintly exotic.

There were a few lines at the end of a poem by John Betjeman. They were as easy to recall now as the time he'd first had to memorise them:
"Time bring back the rapturous ignorance of long ago,
The peace, before the dreadful daylight starts
Of unkept promises and broken hearts."

As JVC concluded the reading of the poem, he'd held the silence for seconds and then quietly offered what seemed at the time to be almost a prayer: "Aaah ... nostalgic reminiscence." As a teenage boy, he had had no idea what the old man was muttering about. He did now.

"Mr Sinclair, your taxi's ready. Will you take it now - or would you like me to ask him to wait a few minutes?"
He turned to the meeting organiser, thought quickly, and answered: "No ..er .. please would you ask him to wait a while?"
He adopted a broad smile and wheeled round to his companion. "Look, Sheila ..." -ñ but she was already gone.