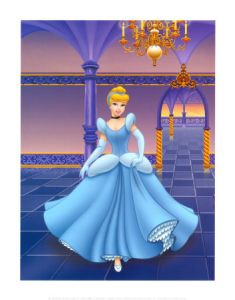 When the lord employed me to be servant to his three daughters, I was the proudest man in the land and the most famous in my little village, but I had no idea how different his daughters would be and how much my life would be affected by one of them.

I had assumed that all three daughters were the lord's with his wife, but I soon learned that one of the daughters was his natural daughter from his first marriage and the other two were his step-daughters through his new wife. My mother had remarried after the death of my father and had more children but she treated us all the same. The lord's second wife though was terrible to her new daughter, a lovely girl called Cinderella.

The wife took to giving Cinderella almost as many household duties as me and I was really embarrassed that the lord's daughter should be treated no better than a worthless person like me. As we shared the duties, Cinderella and I exchanged snatches of conversation and made jokes to lighten our burdens.

It was late in the evenings that our friendship really blossomed. Her horrible step-sisters went to bed early – they needed their beauty sleep – but Cinderella was in no rush to go to her room up in the chilly garret, so we would sit by the open fire as the remaining logs crackled and spluttered, casting long shadows across the room, leaving just burning cinders to illuminate the darkness while we chatted. As we became closer, I took to calling her Cinders.

"I can talk to you about anything" she told me. "You listen to me and you don't judge me. I've never had a friend like you and I don't think I ever will."
One evening, as we sat close together on simple wooden stools, she gradually fell asleep in the warmth of the fire and her body leaned against mine. I gently stroked her golden hair. I was in heaven.

Night after night, we shared our stories and our secrets and our hopes. We had so much in common and laughed together so much. On one thing only did we disagree: how she should respond to the ill-treatment by her evil step-sisters. I wanted them to be punished for their cruelty to her – perhaps add a few poisoned berries to their soup and give them a terrible stomach ache. In my village, no slight went unanswered or unpunished. But Cinderella would hear nothing of it. Instead she showed her sisters only kindness.

"They have known so little love" she explained. "I must care for them."
"You should fight fire with fire" I urged her.
"No", she chided gently. "That way, the flames consume all of our best nature. All we are left with is the embers of hate, ready to be reignited at any moment."
"Then what?"
"You fight fire with water - cool, cleansing, smoothing water. All life comes from water."

I wasn't sure that I understood her, but I couldn't decide whether it was the cleverness of her educated speech or the oddness of her forgiving attitude. Nobody in our village behaved like this and she taught me a new way of looking at life.

One day, the king's son decided to hold a series of balls and, of course, the lord was invited to send his daughters and there was no question that his two step-daughters would attend. There was never any suggestion, however, that Cinderella would go to the ball. When she was left behind, she started to cry.

"Please don't weep" I begged her. "Just tell me – how can I help you?"
"I have a wonderful godmother. Please find her for me. She will know what to do."

Somehow I found the godmother and I brought her to the lord's house in the forest. She asked me to find a pumpkin, six mice, a rat, and six lizards. I had never had such strange requests in all my life but I would do anything for my Cinderella.

I have no idea what the godmother said or did as I waited outside but, when the doors opened, out came a golden coach pulled by six grey horses with a coachman sporting the most splendid moustache and six footmen in laced uniforms. As for Cinderella herself, she looked stunning in a dress of cloth embroidered with gold and silver. Before I had loved her; now I adored her.

That night, Cinderella was home before midnight – as her godmother had told her she must be - and in front of the dying fire she told me all about the ball and the king's son.

"He was so handsome and he danced with me lots of the time. Everyone said we made such a glamorous couple. I think that he really liked me but I could never live in the king's court. All a prince would care about would be his riches and his power. I would just be a little treasure to be displayed from time to time."
I was pleased that she'd enjoyed the event so much and been so popular, but I was glad that she realised that her future was not with the prince. I knew that she could only share her secrets with me and that one day she would come to love me even if I had so little money.

The next night, Cinderella went off excitedly to the second ball. She was home just before midnight and thrilled with her evening.

"The prince had almost every dance with me but he also talked with me. He is a really sensitive and caring man. His riches have not spoiled him in any way. He asked me how I had been and inquired how my sisters treated me."
I was not surprised that the prince found her so attractive but I was frightened when she spoke so warmly about him. Surely she didn't think that a girl who spent her time sitting among the cinders could be a partner to a prince? Surely she realised that it was us who were destined to be husband and wife?

The following night, Cinderella could not wait to go to the third and final ball. I waited anxiously as the clock neared midnight. At last, she returned but only after the magic hour and I was amazed to see that she was back in her working clothes and upset to see that she was so distraught. Once again, she told me everything that had happened.

"The prince and I had every dance together. I felt so warm in his arms and I never took my eyes off his. He can see into my heart. He knows what I want and how I feel. I did not want the ball to end. I did not want us to be apart."

I had to hold back my tears as I heard this account. It was clear that she had now fallen for the prince and that he was utterly smitten with her - but he still did not know who she was or where she lived. His only clue was the little glass slipper that had fallen from her foot as she had rushed to beat her godmother's deadline for being home.

Next day, I heard that the prince's servants were trying to find the woman whose foot would fit the glass slipper and that, once she was located, he was determined to marry her. Yet I was sure that the lord's house would not be visited – it was hidden deep in the forest – and, even if it was, they would never find Cinderella who would no doubt be confined by her sisters to the garret. All I had to do was wait and Cinderella would be mine again, mine alone, mine forever.

But night after night, I would hear her sobbing through the dividing wall between our rooms in the garret. I was so frightened. I didn't know what to do. I have to fight fire with fire, I thought. I could sneak into the king's stables, set the straw alight, and the whole castle would soon be burnt to the ground. The prince would have to move to another part of the land and he would never have the chance to see Cinderella again.

One night I sat alone downstairs and stared into the remains of the fire, willing myself to find the courage to do the deed. But, as the embers died, so did my resolve. I remembered my early conversation with Cinderella about her sisters – all that strange talk of fire and water. When they were so cruel to her, all she thought of were their needs not her own. I knew that there was only one thing that would make her happy but that same thing would destroy me.

What could I do? Someone as lowly as me would never be admitted to the castle, still less allowed to address the prince. But the castle was by a river and I knew that there was a weir at that point, so that night I slipped a message in a glass bottle and dropped the bottle in the river downstream, knowing that in the morning it would be found by someone from the castle. As the bottle bobbed away, so did my dreams. Next day the prince's man arrived at our house with a glass slipper and a suggestion. I never saw my Cinders again.