Back to home page click here
"AN AFRICAN ADVENTURE" 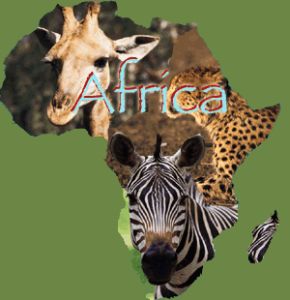 There is a spot in Africa where the boundaries of four nations meet. She came across it while on a holiday at Victoria Falls before they had the children. At this location, the borders of Zambia, Botswana, Zimbabwe and Namibia all come together. In theory, you could be in four countries at once. Except that the position is impossible to identify because it is somewhere at the confluence of the Zambezi River and the Chobe River.

She felt that this could be a metaphor for her present confusion. She no longer knew where her life stopped and those of her husband, daughter and son started. The boundaries were so fluid and changing and occasionally treacherous. What she did know is that she needed to find some dry land, some territory that she could call her own. But which bank should she strive for or should she forge upstream to a new, exciting nation or downriver to the expansive and deep ocean?

Ever since that sojourn at Victoria Falls – still her only return to Africa since her childhood there - she had had a yearning to learn more about the continent and one day to visit it once more. Partly to commence the exploration of a new phase in her life and partly to discover more about this exotic territory, she had enrolled on a course entitled: 'Africa: Colonialism, Conflict, Corruption, Construction'. It was an evening course of 12 two-hour sessions run at the City Literary Institute in central London and the neat alliteration of the title belied the chaotic and often disturbing narrative of the subject.

Damayanti stared into the hall mirror and checked herself out before leaving for the latest Africa class.

She loved her name and knew that her parents had chosen it with care. It was from the Sanskrit word for subdue and meant subduing men by beauty or personality. It had been suggested by her Indian mother and her British father confessed that he was his daughter's first conquest. Her parents had met and married in Uganda where her mother's family had lived for generations and her father was working for a multinational. Her parents had decided to leave the country in 1972 when Idi Amin had expelled all the Uganda Asians and she herself was then only 13.

Even for 50, she reckoned that she looked pretty good, being blessed with a smooth, caramel complexion and deep black eyes. She had put on a bit of weight but could usually disguise this with the right clothes and the first grey hairs were tinted. But naked she could not hide the stretch marks and she was aware that she was about to commence the menopause.

Damayanti turned and entered the living room to kiss her husband before leaving. Graham was much older, 65, and had just retired. They had met at university when she was doing her BA in English and he was studying for an MBA. When she first told him the meaning of her name, he had joked: "That explains why I found you so bewitching then." These days though he seemed less interested in sex and she was feeling less desirable, but they still respected each other and enjoyed each other's company.

"Bye, love" he said. "Enjoy the course - but watch out for the wild animals."
"I will" she assured him. "But any chance that you can sort out some of this undergrowth here?" she pleaded.
"Sure" he answered - but she knew that he would have forgotten this before she had even left the house.

As Damayanti returned to the hallway, she was almost knocked over by her 18 year old daughter hurtling down the stairs and dashing into the kitchen. "Mum!" she almost screamed. "Have you seen my brown boots?"
Her mother sighed and offered some plain advice: "They're probably just where you threw them, dear." She would miss Olivia when she went to university in the autumn but it really was time that the girl started to grow up and not depend on her mother so much.

The front door flung open and and her 16 year old son came crashing into the house, covered in the aftermath of his rugby trials. "Hi, Mum. What's for tea?" Before she could even think of answering, he deposited his filthy boots unceremoniously on the clean carpet.
"Jeremy!" she called though gritted teeth."For the umpteenth time, do I have to tell you to clean those damn boots before you put them down anywhere?"

It had been like this for two decades: cooking, cleaning, clearing. washing, ironing, shopping, and endless car trips to schools, after-school pursuits, sports events, parties. She loved all her three 'children' dearly, but her part-time work as a librarian had increasingly come to feel like a refuge rather than a responsibility and more and more she was aware of a sense of drifting through life, being carried along by the currents of the river but not sure of where she was going.

She had tried explaining to Graham how she felt, but he interrupted and offered what he thought were solutions, when all she really wanted was for him to listen and understand. She wished to work out her own answers. She needed some validation outside of marriage and parenthood.

A few years ago, she had gone away for a long weekend to a health farm and, to her surprise, found herself spending the nights with a middle-aged visitor with considerable charm and an acute sense of her vulnerabilities. It was the first time that she had been unfaithful to Graham and she had felt remorse and guilt. Back at home, for a few days, she had found it impossible to avoid being uncharacteristically quiet and withdrawn. She felt sure that Graham must have suspected something but he never said anything.

Damayanti battled through the urban jungle that was central London for the penultimate session of the City Lit course: an examination of the impact that post-apartheid South Africa was having on the politics of the continent. From early on in the course, she had returned home late, explaining to Graham that most of the students went for a couple of drinks afterwards.

At first, this was the plain truth but soon she had struck up a close relationship with Bereket, a fellow student who was a refugee from Eritrea where he had lived in the troubled border region next to Ethiopia. For seven weeks now, they had been taking a hotel room for around an hour. Of course, there was no way he could afford this, so she paid – in cash, so that nothing appeared on her credit card statements. She was finding this second incidence of infidelity easier than the first.

Bereket was younger than her and she enjoyed his lithe, ebony body. She had never told him the meaning of her name – better for him to think that he was the one executing the seduction. As the weeks had progressed, their lovemaking had become increasingly exploratory and energetic, sometimes a little rough, even animal-like. After this evening's coital encounter, they lay in bed and sampled some of the miniatures from the room's fridge.

"Dama" - he used her diminutive - "I want to continue seeing you after the course ends. I'm sure we can find a way. Of course, what I'd really love is to be able to spend more time with you. Wouldn't it be truly wonderful if we could go on holiday together somewhere abroad and exciting?"

"Wonderful – and utterly impossible, Bereket" she responded. She pondered this outrageous idea for a few quiet moments. What she would really like to do is return to East Africa. She had no wish to revisit Uganda – the hurt was too deep. And she was not particularly attracted to the idea of Eritrea. But there was one place whose very name gave her a warm feeling inside. "I know where I'd like to go" she announced. "Zanzibar."

"Oh no" insisted her lover. "I want to go to America. It would be great for us to have a holiday in Las Vegas – those hotels, the shows, and of course the games and the gambling. I might get rich."

It was an epiphanic moment for Damayanti. She was not in love with Bereket; she was in lust with him. They had so little in common. For all Graham's inadequacies, they shared so much and had decades of memories with each other. There was still so much that they could do together – including returning to Africa, perhaps even to Zanzibar. In recent months, she had been swimming furiously in swirling waters, but she was finally coming up for air, even if she had struck a reef in the river.

She would finish with Bereket. She would tell him when they were dressed. Just at the moment, she felt too exposed and vulnerable. And she would not return to the course at the City Lit. That was over too. When Olivia went off to start her degree in the autumn, she would enroll for an MA in World History at Birbeck College. She would probably take the option on 'Africa in the European imagination'. She had been turning over the idea for months. Now she had decided; she would do it. It would help to define her; no, it would help to redefine her.

Back at home, she found Graham in bed, reading a novel and waiting for her. She undressed and went to the bathroom. When she returned and joined him in bed, they did not immediately switch off the light.
Graham broke the silence: "You've been pensive recently – a bit distant. Are you OK?"
Damayanti took some time to respond: "I know I've been a bit odd. I'm sorry. I've been away." She paused and then added: "I've been on a journey. But I'm back now."
"You're so sweet. Sometimes I just don't understand what you're talking about."
"I know. Sometimes I don't understand myself."

Her husband humoured her: "So – where have you been, my love?"
She hesitated and then offered: "... In Africa."
He continued with the fiction: "And how was it?"
"Hot and sweaty."
"Yes, I guess it would be. Well, I'm glad that you're back."

After an interval, he offered his wife a revelation: "Actually, I didn't say anything, but I knew that you'd been to Africa."
"Really?" she queried. "How come?"
Quietly he explained: "Because of the cheetah marks on your back."