Back to home page click here
BREAKING THE SOUND BARRIER:

Ever since the Wright brothers made the first heavier than air flight on 17 December 1903, man has attempted to fly faster and faster. It was long appreciated that breaking through the sound barrier would present a formidable challenge. 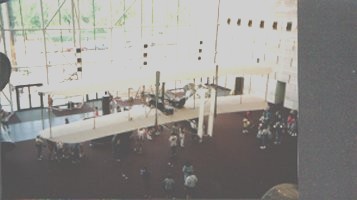 The speed of sound is commonly refered to as Mach 1, named after the 19th century Austrian physicist Ernst Mach [for biographical details click here]. Less than Mach 0.8 is said to be subsonic, while Mach 0.8 to Mach 1.2 is said to be transonic. Mach 1.2 to Mach 5.0 is described as supersonic, while speeds greater than Mach 5.0 are characterised as hypersonic.

The first flight at faster than the speed of sound occurred on 14 October 1947. The aircraft was the Bell X-1 and the pilot was Captain Charles Yeager.

Technically the speed of sound had probably been broken before that by several Second World War aircraft. Some British and American fighters may have unintentionally exceeded the speed of sound in an evasive dive and there are unconfirmed reports that the German Me 262 jet fighter managed to break the sound barrier.

It was two years later before the sound barrier was broken by an American aircraft the Bell X-1. Test pilot 'Chuck' Yeager named the aircraft 'Glamorous Glennis' after his wife. It was painted bright orange because it was thought that this would help the camera and chase aircraft tracking the flight (it was later found that white was a better colour for these purposes).

The X-1 was taken up to 20,000 feet slung in the bomb bay of a Boeing B-29 and then released above the Mojave desert in California. The West Virginian pilot of the X-1 'Chuck' Yeager was a Second World War fighter ace who had turned to test flying. Two days before the fateful flight, he had ridden a horse into a gate and cracked two ribs. This made climbing down the ladder from the B-29 into the cockpit of the X-1 - an operation performed at 7,000 feet - extremely painful. Also it necessitated the use of an improvished piece of broomstick in order to enable him to use it as a lever to lock the cockpit door from the inside.

It was Yeager's 13th flight in the X-1 and the 50th flight by the aircraft. This time he broke through the sound barrier, the precise speed achieved being Mach 1.015. In his autobiography, Yeager later commented: "I thought I was seeing things! We were flying supersonic! And it was as smooth as a baby's bottom: Grandma could be sitting up there sipping lemonade." The flight was described in the book "The Right Stuff" and depicted in the film of the book [for review click here].

This was the time of the Cold War and the Americans did not want the Russians to know too much about their military capability, so amazingly news of the breaking of the sound barrier was withheld from the world for over eight months. Although "Aviation Week" leaked the news in December 1947, the Air Force did not confirm it until June 1948. A few months later, the first British aircraft to fly faster than the speed of sound was the DH 108 Swallow on 9 September 1948. 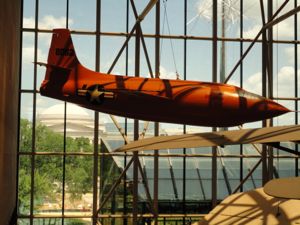 In fact, there were three X-1s and the aircraft eventually reached a speed of Mach 1.46.

Today, of course, modern fighter jets routinely excceed the speed of sound. In the book "The Cutting Edge", an F-14 pilot is quoted as follows:

"A shock wave forms on the aircraft when it reaches supersonic speeds. From the front of the plane, the shock wave appears as a circle, but from the back and sides, it looks like very sharp spikes coming off the plane. It is a rare and spectacular sight, only visible in humid weather. Usually the planes are up too high when supersonic for a visible vapor wave, and since you can't fly supersonic around populations, very few people have caught it stateside.
When you go supersonic, you don't feel a thing. It's not the Chuck Yeager story anymore. Planes that are designed to go supersonic go right through 'the number' without a blink. The airplane is as comfortable to fly at landing speeds as it is supersonic. Things just happen faster."

As aircraft approach the speed of sound, an interesting phenemomen occurrs in respect of air movement over the wings. This is known as the Prandtl-Glauert singularity and makes for some impressive photographs.

The first flight at more than twice the speed of sound occurred on 20 November 1953. The aircraft was the Douglas D-558-2 Skyrocket and the pilot was Scott Crossfield.

Only three weeks later, on 12 December 1953, the record was smashed again. The aircraft was the Bell X-1A and the pilot was again 'Chuck' Yeager. In fact, Yeager took the aircraft to Mach 2.44 (1,650 mph). However, he then experienced a high speed phenomenon known as roll-coupling. The aircraft went completely out of control and tumbled down for 36,000 feet. Yeager was knocked semi-conscious but managed to regain control of the aircraft in time to land it safely.

Concorde was the first civilian aircraft to fly at twice the speed of sound in September 1973.

The first flight at faster than three times the speed of sound occurred on 27 September 1956. The aircraft was the Bell X-2 and the pilot was Captain Milburn Apt.

The Bell X-2 was launched from a specially-modified Boeing B-50 at 31,800 feet. It achieved a speed of Mach 3.196 (2,094 mph). However, the flight then encountered problems known as inertia coupling and Apt jettisoned the cockpit capsule. For some reason, he was unable to use his parachute and was killed - it was his first flight in the X-2. The aircraft itself crashed of course and was scrapped.

The first flight at faster than four times the speed of sound occurred on 7 March 1961. The aircraft was the North American X-15 and the pilot was Captain Robert White.

The first flight at faster than five times the speed of sound occurred on 23 June 1961. The aircraft was again the North American X-15 and the pilot was again Robert White.

The first flight at faster than six times the speed of sound occurred on 9 November 1961. The aircraft was the North American X-15A-2 and the pilot was once again Robert White.

The first flight at seven times the speed of sound occurred on 27 March 2004. The aircraft was the X-43A which was unpiloted.

In fact, although the media at the time widely reported the flight as achieving Mach 7, subsequent assessment revealed that the new speed record was Mach 6.83 (5,060 mph).

The 12-foot long X-43A was flown to a height of 100,000 feet over California by a modified Boeing B-52 bomber. It was then dropped and a revolutionary ramjet-scramjet engine came into action for a mere 11 seconds. This was enough to take the experimental craft to its record speed. It then went through a series of manoeuvres for six minutes before it made a planned splash-down in the ocean. It was not recovered because of the cost.

In a normal jet engine, fan blades compress the air. However, in the scramjet, the combustion of hydrogen fuel in a stream of air is compressed by the high speed of the aircraft. Since a scramjet only starts to work at about six times the speed of sound, the X-43A was initially accelerated by a Pegasus rocket.

In the course of its 11 seconds of power, the X-41A travelled about 15 miles. The Wright brothers first flight lasted 12 seconds and covered 120 feet. That's progress for you.

The first flight at ten times the speed of sound occurred on 16 November 2004. Again the aircraft was the unpiloted X-43A.

In fact, although the media at the time widely reported the flight as achieving Mach 10 (around 6,800 mph), it was probably somewhat short of this and the precise speed awaits detailed analysis of the test results.

The two decades from 1947 to 1967 were times of immense accomplishment as man went from Mach 1 to Mach 6. Now, in the course of 2004, an unmanned craft has taken the record to Mach 10. It is an astonishing achievment.

Is this the end of the story? Dr Alan Paull, leader of a scramjet group at the University of Queensland in Australia, hopes to extend his present programme to contemplate scramjet engine tests between Mach 8 and Mach 12. Theoretically, the 'envelope' within which scramjet travel is efficient is between Mach 5 and Mach 15. So, watch this space ...

Meanwhile I received this comment on this essay from Mike Waters:

"Thank you for a fascinating article on high speed flight! I do have one quibble though; the Space Shuttle enters the atmosphere at about Mach 18! NASA may call is a 'lumbering truck', but in fact it out performs every aircraft ever made!"