In the last 15 years, more than a million British tourists have visited Cuba. Many of them went to Varadero which is a beach resort on the north of the island, just east of the capital Havana. Anticipating real change in the near future, Roger & Vee wanted to go to Cuba before market forces and American tourists totally change the experience and indeed, just two weeks before our departure, Fidel Castro announced that he was stepping down as the world's longest-serving president after an astonishing 49 years in power. However, we went nowhere near Varadero or any other beach resort because our interest was in the history, culture and politics of the nation.

We visited with the company Travel Editions [click here]. Our group comprised a total of 25 people. There were 10 couples - including two brothers with their wives and two sisters with their husbands  and five singles (all women). Except for three in their early 40s, all were aged mid fifties to early seventies. Four of the group spoke Spanish which was a real help. We all got along very well. Inevitably though in such a large group, we tended to split into smaller units for meals and wanderings. Roger & Vee spent a lot of time with Jean-Pierre & Annabell Boulé and Bill & Ann Samuel who were excellent company.

Amazingly a colleague of Roger's on the Board of the New National Consumer Council, Stephen Locke, made exactly the same visit a month previously and he gave lots of good advice on things to take and places to go. The best piece of advice was to take domestic items to distribute to Cubans who are really impoverished and we took soap, tootpaste, biros and a few magazines. Roger prepared for the trip by reading the Fidel Castro biography "My Life" [for review click here] and, during the holiday, he read the Martin Cruz Smith novel "Havana Bay" [for review click here]. For Roger, Cuba was his 49th country visited.

Cuba is by far the largest country in the Caribbean with a total land area of 111,000 sq km or 43,000 sq miles. The main island  Isla Grande  is about 1,250 km (776 miles) long and on average 100 km (62 miles) wide. This makes it bigger than all the other Caribbean countries put together and around the same size as England.

The island was discovered by Columbus in 1492 and ruled by Spain for four centuries until it gained its independence following the Spanish-American War of 1898 (although Britain briefly occupied the island in 1762). The Spanish influence is everywhere, not least of course in the language and the architecture.

The first part of last century was dominated by two dictators: Gerardo Machado and Fulgenico Batista. Then came the Cuban revolution in 1959, so we were travelling to the island the year before the 50th anniversary of the event. There has been so little economic development since the 1950s that so much of Cuban society seems to be in a time warp.

The United States has imposed a trade embargo on Cuba since 1961. In votes in the United Nations General Assembly, only four countries support the embargo: the USA itself and Israel, the Marshall islands and Nauru. The massive economic subsidies from the Soviet Union ended with the collapse of the USSR in 1991 leading to what is called the special period when the economy contracted massively and there were terrible shortages and extensive blackouts. The revolution survived, thanks to economic support from Hugo Chávez of Venezuela and more recently some backing from China.

The population of Cuba is 11 million. However, there are around 1.3M Cuban Americans  around one in ten of all Cubans - living mainly in Florida.

Since the flight from London Gatwick was early on Thursday morning, Roger & Vee spent the previous night at the Sofitel Hotel at the airport and rose at 5.45 am. In fact, our Virgin Atlantic [click here] flight  a Boeing 747-400  was almost two hours late taking off. This was because we had to wait while we look for a spare part that is compatible (scary) which turned out to be a computer component that needed to be driven over from Heathrow Airport (even scarier).

In the event, the flight was trouble-free except for regular turbulence. The journey was almost 9 hours and we landed at Havana's José Martí airport at 3.25 pm local time. We were immediately acquainted with our guide Eduardo (an incredibly knowledgeable, informative and likable man), our driver Elais (a very competent former driver with Fidel Casto's bodyguard) and our vehicle (a modern, air-conditioned Mercedes-Benz coach).

We were soon at our accommodation in Havava: the Sevilla Hotel [click here] on the wide Paseo de Prado. This hotel is 100 years old this year and represents a homage to Moorish architecture which, over the years, has been visited by a host of famous personages including Josephine Baker and Al Capone. As we arrived, we found that a group was playing Cuban music in the courtyard and we were to learn that everywhere in Cuba  in every bar or restaurant, in every hotel or square  there would be music and often dancing.

We were given an hour and a half to unpack and freshen up and then taken out for a meal. This was at a restaurant called La Dominica just off the Plaza de Armas. As we were to find throughout most of our trip, the food was adequate but unexciting. The choice was usually very similar  pork, chicken, beef or lobster  the vegetables were limited and there was an absence of seasoning and variety. Roger loves his desserts and almost invariably there was only one option here: what the Cubans call flan but we would call crème caramel.

The tour began properly at at 9.30 am on Friday morning. As for most of our trip, it was a hot (low 30sC) and sunny day. Few visitors to Cuba escape without visiting a cigar factory and a rum distillery. This morning, we were supposed to be viewing the Partagas cigar factory but it was busy with tourists (we would visit one later in the tour), so we simply called into the shop (Vee bought a single cigar as a gift for a friend). However, we were able to go Museo del Ron (the Rum Museum) on Calle San Pedro. We were conducted around the fermentation, distillation, filtration, ageing, blending and bottling processes and offered a sample taste of a three-year old rum. Obviously the older a rum the better, but we learned that 6% a year evaporates from the barrels, so there is normally a limit to the ageing process. In truth, the building itself is an attraction: a colonial construction with a typical open courtyard and lovely coloured stained glass windows (known locally as mediopunto). 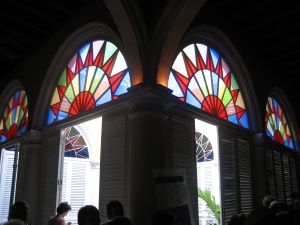 Windows in the Rum Museum

Havana is the capital of Cuba and the largest city in the Caribbean. Around 3M live there  around a quarter of the island's population. It extends westwards from Havana Bay with the oldest part next to the Bay. Eduardo now took us on a walking tour of Habana Vieja (Old Havana). In recent years, this area  the largest colonial centre in Latin America - has been the subject of a massive renovation project led by Eusebio Leal [click here] and rightly the old town is a UNESCO world heritage site.