Back to home page click here
THE BALTIC CAPITALS

“Never praise weather or wife in the morning; you never know how it will turn out in the evening.”

In recent years, Roger has enjoyed short holiday breaks with his sister Silvia (two years younger) as well as regular holidays with his wife Vee. After three-day weekends in Paris (2006) and Sarajevo (2007), this year the third trip for brother and sister was longer (six nights) and further (the three Baltic states). For Roger, this holiday brought the total number of countries visited to 52.

The Baltic states – from north to south: Estonia, Latvia and Lithuania – have long, complicated and different histories. Ethnically Latvians and Lithuanians are closely related, while Estonians have different origins and linguistically are related to the Finnish. Politically, Estonia and Latvia have had more in common, being subject to foreign rule from the 13th-20th century, while Lithuania has been a powerful empire in its own right especially in the period of the 14th-16th centuries. Most Estonians and Latvians are Lutheran, while most Lithuanians are Catholic (the Russian minorities in each country are Orthodox).

However, in the last century, the experience of the three nations has been very similar. All three gained their independence in 1918 and had first republics which increasingly lapsed into totalitarian regimes of the Right as Nazism grew in Germany. In each case, as a result of the Ribbentrop-Molotov Treaty of 1939, the USSR assumed control of the country and took occupation of it.

Nazi Germany invaded the USSR and occupied all the Baltic States in 1941 and retained control for three years until expelled by Soviet forces in 1944. Another 57 years of Communist repression only ended with independence again in September 1991. All three states joined the European Union in May 2004.

So we were visiting the Baltics 17 years after the three member states regained their independence – a period of great change in the political, economic and social lives of the Estonians, Latvians, and Lithuanians. The particular week of our trip was one of heightened political sensitivity, since the day before our flight Russian forces had invaded the break-away Georgian enclave of South Ossetia. The subsequent statement by the Russian President Dmitry Medvedev, that the country reserves the right to defend Russian citizens wherever they live, unnerved many in Estonia, Latvia and Lithuania since all these independent states have Russian populations.

Our holiday was booked with the company Travel Editions [click here] and the group was 29 in all – many teachers, a lot of scientists and technologists, at least three Johns, and most in their 60s and 70s.

Travelling from north to south, Estonia is the first – and the smallest - of the three Baltic states. Some 70% of the country comprises forest. There are two large islands and other smaller ones. In a 'golden age', Estonia was once part of Sweden.

Today Estonia has a population of only 1.4 million. They tend to be reserved and private people, not given to physical demonstrations of affection. Some 65% are ethnically Estonian, while 32% are Russian. A large number of the Russian-speaking industrial workers brought into the country in the 1970s have ended up without Estonian citizenship for which they are required to pass an Estonian-language test. This is largely by choice since they wish to retain Russian citizenship. About a tenth of the population has no citizenship of any kind. Those without Estonian citizenship are not allowed to vote in elections but otherwise they enjoy the same rights as other citizens.

Politically Estonia has had a troubled independence with a succession of different administrations. Already less than 50% of Estonians vote in national elections. The country has substantially embraced the Internet becoming something of a world leader in the on-line delivery of public information and services. All members of parliament have laptops and the parliament largely manages without paper documents.

Voters can cast their ballot through the Internet and about 20% of those voting do so in this way. Parking charges are paid by mobile and next year voting will be possible by mobile too. Most bus tickets are purchased on-line and most tax declarations are made on-line.

Estonia has enjoyed strong economic growth since joining the EU. Most citizens, however, have poor living standards because of low incomes and high inflation. The average monthly salary before tax is only around 14,000 Estonian crowns (around Ł700), while a typical monthly pension is a mere 4,000 crowns (about Ł200).

The Estonian language is closely related to Finnish and distantly related to Hungarian. It is an exceptionally difficult language to learn, not least because it has 14 cases (Hungarian has 26). As a special oddity, Estonian boasts the word with the most consecutively repeated vowel: 'jäääär' which means 'edge of ice'

Since the flight from London Gatwick was early on Saturday morning, Roger & Silvia spent the previous night at the Sofitel Hotel at the airport and rose at 6 am. The flight was with Estonian Air who do not provide meals as part of the ticket price but we had a cooked breakfast before leaving. It was a two and a half our flight and Estonia is two hours ahead of British time, so we arrived at Tallinn - located on the northern coast of the country - at the local time of 2.20 pm.

We were met by our guide Riina Altpere. Apparently normally people on this holiday are accompanied from Gatwick and throughout the trip by a British guide with local guides providing more detailed information in each capital or site. In fact, for some reason, we did not have a British guide and our Estonian guide Riina accompanied through all three Baltic states.

Actually this worked out very well because Riina spoke excellent English, was extremely knowledgeable and communicative, and was both personable and humorous. The experience of her family members caught something of the history of the nation: her paternal grandfather was an Estonian army officer who was sent to Siberia in 1939 and never returned, while her maternal grandfather was a fisherman who like all other fishermen suffered the cutting up of his boat by the Soviets so that there was no possible escape to Finland.

We arrived in the country to overcast and gloomy weather, but Riina told us there is a local expression that “An Estonian summer is three months of bad skiing weather” - not much consolation since we were not planning on any skiing. The drive into Tallinn did not take long. This is not a large capital – some 400,000 people (actually around a third of the national population). However, some 400 cruise ships and 4 million tourists a year are currently visiting the city. The city was badly damaged by Soviet bombers (piloted by female crew) on the night of 9 March 1944, but much of the historic Old Town has been carefully restored.

As we approached the city centre, on the north side of the Old Town, we saw our first sight: St Olaf's Church. Its main claim to fame is that, when its 159-metre high spire was completed around 1500, it was the tallest building in the world (following fires and reconstruction, is is now only 124 metres).

Our hotel was Grand Hotel Tallinn and, after a mere three-quarters of an hour to check into our rooms and have a quick snack, Riina took us on a walking tour of the Old Town from 4.30-6.45 pm. It was a charming place characterised by cobbled streets and pastel-coloured buildings with some strikingly attractive doors.

Castle Square has two splendid buildings facing one another. On the west side, is the Toompea Castle with its white and pink baroque fa&#231ade dating from the 18th century when Catherine the Great had the structure rebuilt. Today it houses the Estonian Parliament which has 101 members representing (currently) five political parties. Facing the parliament, on the east side of the square is the Russian Orthodox Alexander Nevsky Cathedral with its distinctive onion domes. This was built in 1900 as part of the general wave of Russification.

Round the corner is the Lutheran Dome Church. This was constructed in wood in 1219 and reconstructed in stone between 1229-1240. The church has a 17th century organ with 6,900 pipes and someone happened to be playing it during our visit which gave a magical atmosphere to our short time there. Walking past Stenbock House [click here] - the home of the Estonian Government - we were reminded of more recent and disturbing history, since the building wall carries a plaque remembering the Government officials murdered by the Soviets in 1941-1942. One of the other impressive churches of the city which we viewed externally is St Nicholas Church which is Orthodox and in its present form dates from 1822-1827.

Our walking tour concluded in the heart of the Old Town: the large, pedestrianised Town Hall Square. Naturally the dominant building is the Town Hall itself, the only intact Gothic town hall in northern Europe reconstructed in 1402-1404. Apparently one can climb 115 steps for good views of the city. Other historic buildings line the square including the Town Council Pharmacy, said to be the the world's oldest continuously running pharmacy (it has been there since at least 1422).

The square and the surrounding streets are full of cafés and restaurants and, once the tour was completed, we all split up and headed for our own choice of location for a much-desired dinner. Roger & Silvia found themselves in a place called “Kuldse Notsu Kðrts” [click here] on Dunkri Street. Located in the vaulted cellar of the St. Petersbourg Hotel, this is described as "an authentic Estonian country style restaurant” and Roger flung himself into the spirit by going for the most traditional dishes that he could find, short of actually venturing on to the quintessentially Estonian fare of blood sausages. This meant that he started with the house speciality called Kuldse Notse which is a simply huge concoction of crisp pork knuckle with sauerkraut, baked potatoes and mustard. For dessert, he ordered something called Tuuliku Kama described as “an Estonian dish prepared from a mixture of rye, oat, barley and pea flour with clabbered [sic] milk” which turned out to look and taste like milky, cold porridge. 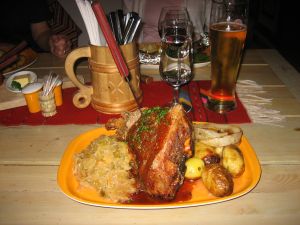 Next day (Sunday) was devoted to a day trip out to Lahemaa National Park We left the hotel at 9.10 am and we were not back until 5.10 pm so it was a full day.

The park is located due east of Tallinn and, on the way, we stopped first at the Tallinn Song Bowl which houses the national song festivals that have been held every five years since 1869 including the period of Soviet occupation. Some 30,000 can gather here and it is seen as a centre of national revival and identity.

Lahemaa National Park (the name means 'land of bays') is 475 sq km of forested hinterland with a stretch of coastline along the Gulf of Finland that was heavily fortified in the Soviet period. It was opened in 1971 and was the first in the Soviet Union, its supporters winning the right to open it by finding some obscure references in Lenin's works to the idea of preserving one's countryside heritage.

The park includes 14 lakes, eight rivers and four waterfalls. We stopped to view the Jagala Waterfall which is the country's largest and known as Estonia's Niagara Falls (in fact, its 7.2 metres hardly compares with Niagara 's 52 metres).